eBPF, Microservices, Docker, and Cilium: From Novice to Seasoned

In this post we will be covering eBPF concepts, as well as challenges faced when applying network policies for microservices and how these challenges can be tackled. Finally, we will have a look at Cilium to see how it makes eBPF simple and easy to utilize.

In this section we are going to answer some important questions as: - What is BPF and eBPF? What is difference between them? - Use-cases for eBPF - What is the eBPF system call and why is it important? - How to create an eBPF program?

Before talking about extended Berkely Packet Filters (eBPF), lets remove the ‘e’ for a second and talk about BPF.

BPF was first introduced in 1992 by Steven McCanne and Van Jacobson as an in-kernel virtual machine that translates byte-code to the underlying machine-architecture and provides packet filtering using a simple instruction set on Free-BSD and Linux. Before the introduction of BPF, packet filtering APIs such as Sun’s STREAMS NIT, DEC’s Ultrix Packet Filter, SGI’s Snoop and Xerox Alto had CMU/Stanford Packet Filter had to copy packets from the kernel to the userspace to be filtered, needless to say, it is not a the most optimal way to do line-rate packet filtering especially when traffic peaks. Also, copying all packets into userspace is expensive.

To filter packets with BPF, fitler-expressions (e.g., “ip or tcp and port 80”) were defined, then parsed to produce byte-code. The byte code would then be attached to a tap interface and is then injected into the kernel in the form of native instructions after being checked by a verifier (makes sure that the program terminates and is safe to execute).

Basically, if you have used tcpdump then you have made use of BPF, the filter that you specify will be compiled to BPF byte code, then inserted into the kernel showing only the packets that applies to that filter. 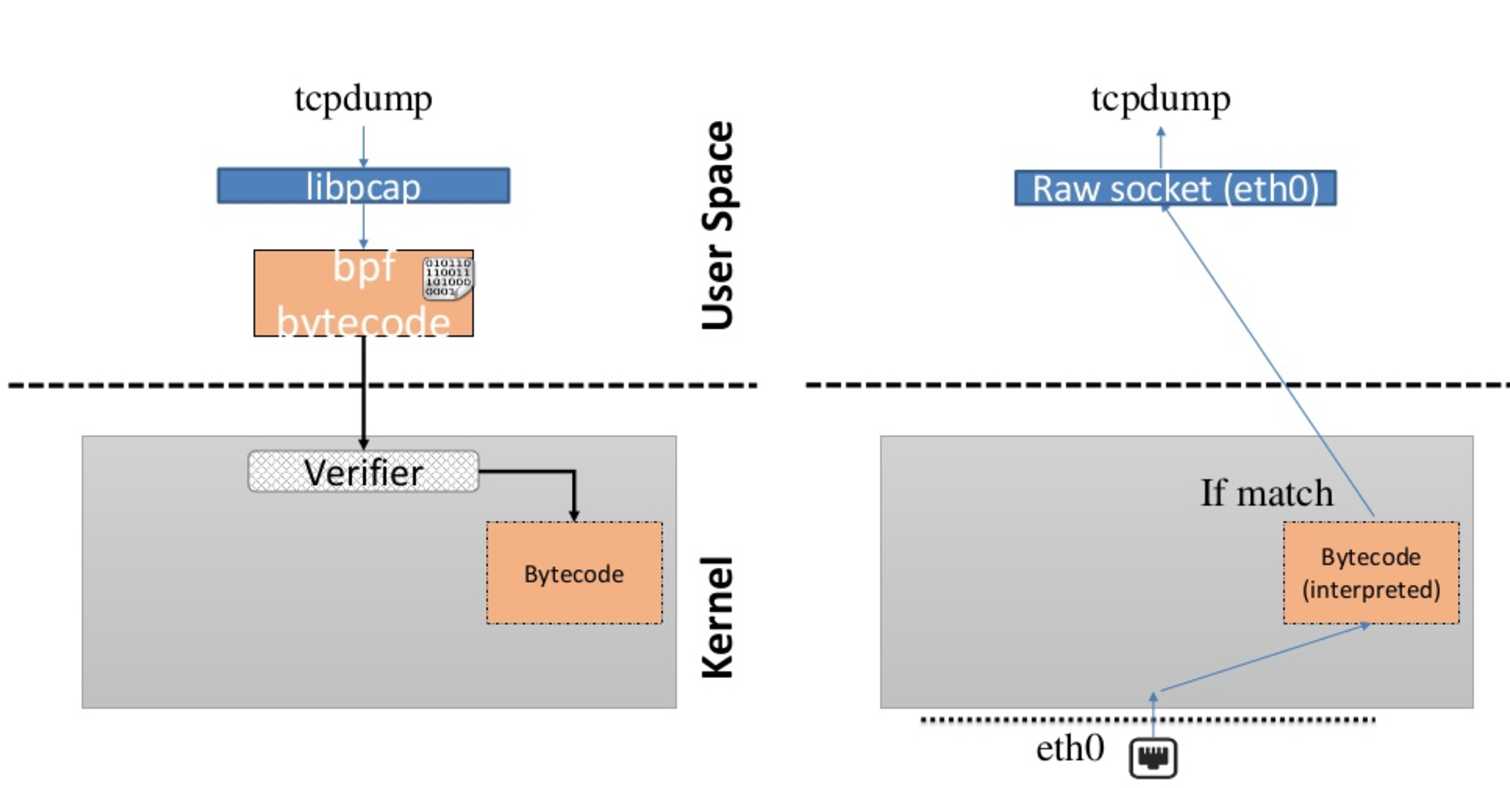 With BPF, we are pretty much limited to packet fitlering and monitoring, therefore BPF was extended to do much more (e.g., parsing, lookup, update, modification), hence the name extended BPF (eBPF). Below are some of the features that were introduced with eBPF: - A separate system call which is externally usable with BPF:

A feature-based comparison can be found in the table below:

When the eBPF functionality was added as of version 3.18 of the kernel, two features were the key enablers: - The bpf() system call - The underlying kernel magic.

The bpf system call can be showed below:

Lets look at these paramters in details - The cmd parameters is basically telling the kernel which command to execute. There are ten availabe commands that can be passed for this parameter:

How to create an eBPF program?

There are two ways to write an eBFP program: - if you are one of those machine-men who like writing byte code, you can definitely do that (may the odds be ever in your favor). - Use backend-conversion tools like LLVM and write your program in a higher-level language (e.g, C) which then gets compiled to byte code.

After that the byte code is verified, compiled with a JIT compiler to the CPU arhitecture at hand, and finally injected at the desired hook point (e.g., at the traffic control layer). This way policies on packets can be enforced even before being processed the network stack. 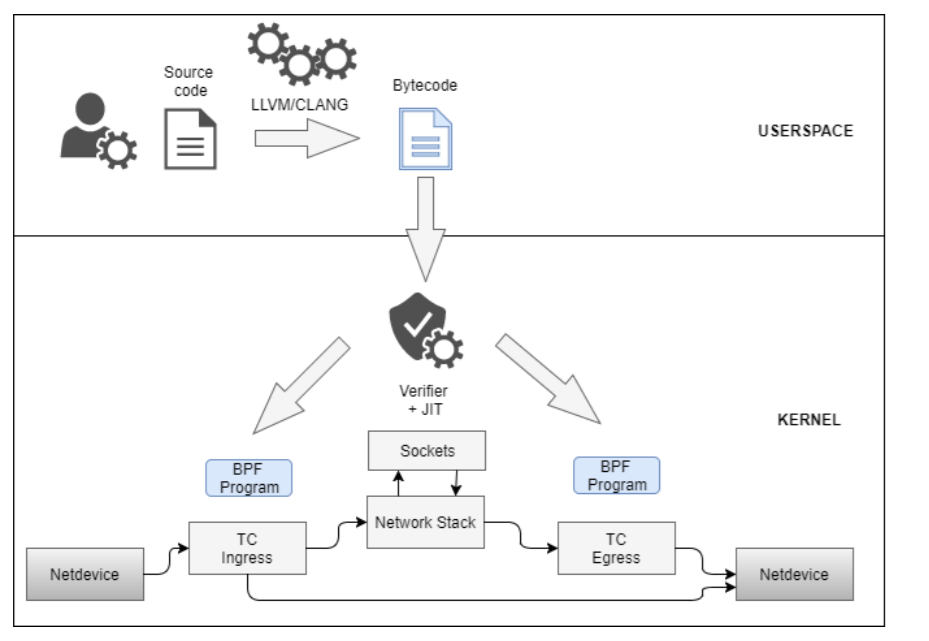 Now that we understand how eBPF works, lets look into some constructs we will need for having the necessary knoweldge building blocks. In this section, we are going to: - Understand how microservices interface with the outside world and with one another - Look at how security policies are currently applied to microservices. - Look at how security polies would work with eBPF

What are Microservices and how do they work?

If you have been following the posts on my blog, I have previously discussed the definition of microservices and how you can decompose a monoltih into microservices.

But to recap, a microservice is an architecture style for building applications so that they are more loosely coupled, easy to modify, test, and integrate with other microservices. The separation of concerns gives you additional felxibility to scale,test, and deploy your appliations independently from one another.

Usually, to successfully apply the microservice model of developement, each service should do one thing and do it well. Furthermore, most of the microservices nowadays are based on HTTP, whereas each service interfaces with the outside world by exposing a path to the service it offers. For example, consider the below figure, where we have three microservices, each exposes a different path. 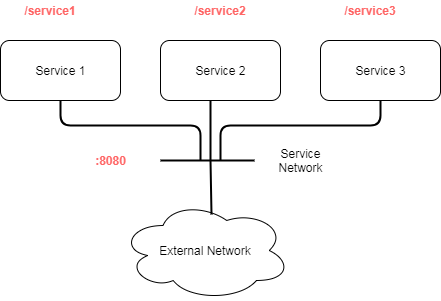 Since each microservice exposes a different path, and maybe even a different port, the question arises as to how can we apply security polocies to such services.

There are two methods to apply security policies with IPTables: - Define rules customized for every container / microservice - Define rules on a more granualr level on the bridge that connects the services together (speaking of in-host networking here)

If we are talking about microservices and how many they can be on single host, we can safely assume that its not going to be a walk in the park setting these rules up on a per-container level, needless to say, it is not so easy to scale. Therefore, in a container run-time such as docker, this is how security policies and NAT rules are applied. Alternatively, with OpenStack for example, network namespaces are used to carry out the routing functionality and therefore carry its own IPTable rules configuration.

Now that we know how IPTables rules are applied, there are two things that are yet left to discuss.

What happens when IPTables are used in a microservice architecure?

To answer the first question, lets revisit a sample microservice application architecture through the figure below:

With IPTables, we can do things such as accepting or dropping packets/segments based on their L3/L4 parameters.

What if we want to apply security policies based on the application level verbs (e.g., with REST GET/PUT/POST/DELETE) or RPC Paths (/service1, /service2, /service3) for each microservice? With IPTables, we can apply policies for instance, only to allow packets with destination port of 8080, but not application level policies on a per-path level.

How efficient it is to use IPTables for microservices? To answer this questions, lets look at what happens when a packet is sent from a container that represents a microservice. 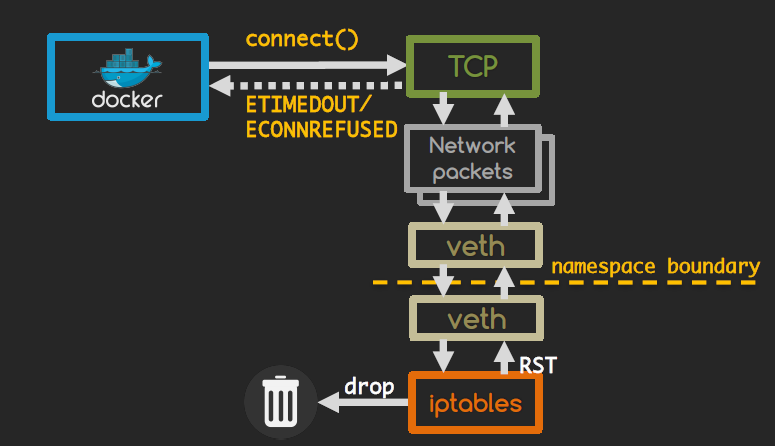 Each container (network namespace) has its own stack. Therefore, the steps that will be followed are: - The client program will issue a connect() system call - The packet will be path through the stack and get constructed accordingly. - The packet will be forwarded out of the namespace through a vETH pair. - The host will recieve the packet, apply IPTables rules and decide whether to drop or forward the packet to destination. - Finally, the client is notified in case the packet is dropped with a RST message.

In terms of hops, we need 5 hops of calls to reach to a decision on whether that particular packet should be forwarded which is not the most optimum scenario. Can we do better? Let’s have a look at eBPF policies.

So IPTables are not the best solution for applying policies to microservices as they are limited to L3/4 policies, furthermore, they need whole packet construction and forwarding to reach to a decision.

With eBPF we really don’t need to go all the way in constructing the packet. eBPF programs hook into the kernel, which makes it possible to apply policies on the system call level before even entering the stack or constructing a packet. eBPF attaches to the container network namespace, as a result, all the calls are intercepted and filtered on the spot.

eBPF also has a feature called maps which allows infromation sharing between different BPF programs or between userspace and kernel-space. One application for such feature is sharing state between containers and proxy services. 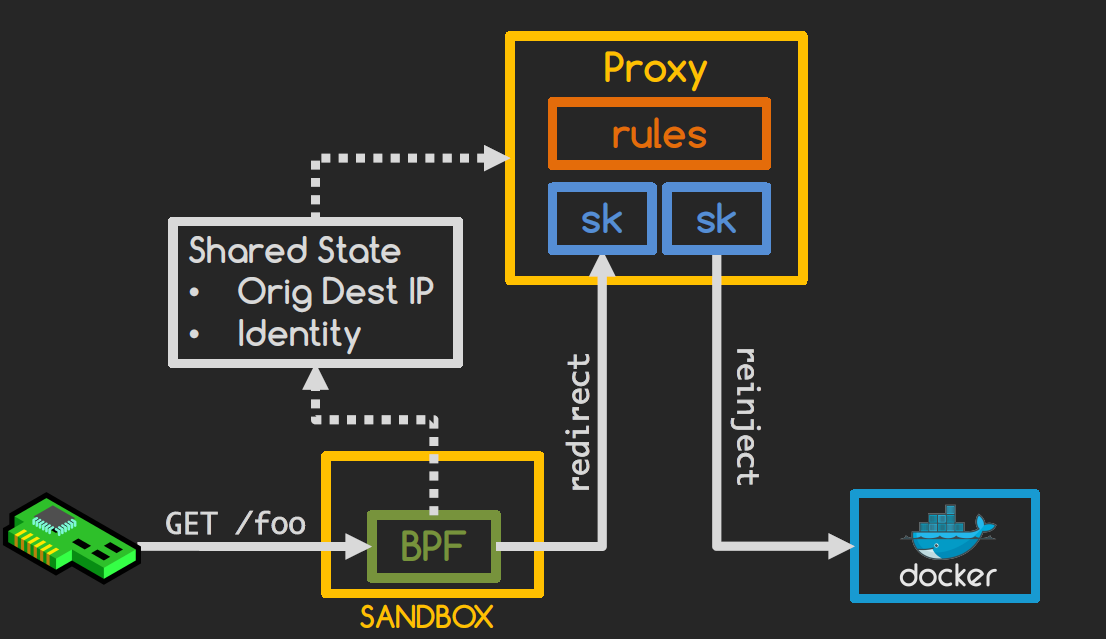 So far we have been talking about the technologies but we have not really discussed the tools or frameworks that unlocks the ease-of-use for configuring such policies (you guessed right, I am talking about Cillium).

So far so good, lets review what we have in our knowledge pocket so far. - We know what eBPF is. - We know how to apply policies with eBPF. - We also know that security policies for microservices are. better applied with eBPF policies than with IPTable rules.

Since the documentation on the main page of the Cillium project is quite good,I am not going to repeat whats there, I will rather summarize the important bits, you can have a look yourself here.

Copied from the documentation, the Cilium definition is:

What we are really interested in though is how Cilium applies security policies, but before that lets have a look at two important constructs.

Please find below a scripted demo, which follows the instruction on the project documentation page to show how policies can be applied with Cilium along with Docker.